Home / Blog / FRIDGE DOES NOT FREEZE 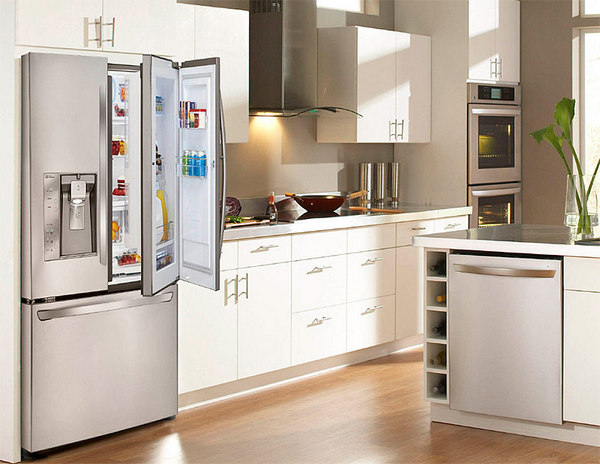 Freezing is the main function of a refrigerator. The most frequent reasons why fridge doesn’t freeze and fridge repair is needed

The most frequent reason why the fridge does not freeze in fridge No Frost is defrosted system breakage. Because the defrost has failed, ice forms on the evaporator in the freezer compartment. Gradually it tightens the air duct through which the cold air enters the upper chamber, and it stops freezing.

The flap is designed to regulate the flow of cooled air from the No Frost evaporator located in the freezer compartment to the cooling compartment. When the upper chamber is cooling, the flap should be open. But if it is “stuck” in the closed position, the cold air from the freezer does not flow into the fridge compartment and the temperature in it rises. The shutter jamming, most often, is connected with the failure of the motor that sets it in motion, or the reed sensor, which determines the position of the shutter.

The fan in a No Frost refrigerator blows cold air from the freezer to the fridge compartment. If it’s broken, the air flow to the upper compartment stops, and it doesn’t cool. Failure is often caused by failure of the defrosting system: rotation of the fan is blocked by the formed ice and the motor burns out or the blades get broken.

In electronically controlled dual-compressor refrigerators, cooling is activated by the temperature sensor of the refrigerating chamber. If it fails, similar to the electromechanical case, the cooling does not turn on and the chamber does not cool.

Compressor motor circulates freon in the refrigerator. Refrigerant pressure changes as it flows through the refrigerant circuit. There is a capillary tube in the circuit, whose length and diameter are chosen so that the freon boils in the evaporator and draws heat from the chamber. If the compressor in the refrigeration compartment stops working, there is no circulation and it stops cooling.

Most often, there is a breakage or short circuit of the windings in the motors. Sometimes a compressor “wedge” occurs.

The starting relay in the refrigerator performs two functions: it starts the motor and protects it from overloading. If the relay fails, the bimetallic plate that closes the circuit usually loses its properties. Therefore, the motor does not start. The cooling does not start.

Less often, the safety mechanism fails, so there is a false triggering of the relay even when the compressor is slightly heated. As a result, the motor starts and almost immediately shuts down.

In long-life refrigerators, refrigerant leaks in the evaporator or locking connections are most often from corrosion. Freon escapes and the refrigerator compartment stops cooling.

If the clog is partial, freon continues to circulate through the cooling circuit, but the cross-section of the capillary tube changes, so the refrigerant boils in the wrong place. For this reason, the refrigerating chamber does not freeze well. To compensate for the lack of cold, the compressor runs continuously and does not turn off.

Over the time of using the refrigerator, the rubber gasket may lose its properties: torn, pressed, or dried out. Warm air begins to penetrate into the chamber and the temperature in the chamber increases.

The compressor motor pumps freon through the refrigerator circuit. Moving through the piping, the refrigerant changes pressure boils in the evaporator and draws heat from the chamber. When the freezer motor fails, the freon circulation stops, and the freezer compartment stops freezing.

Compressors in refrigerators are equipped with a starter relay: it closes the operating and starting winding of the motor, thus helping it to start, and also protects the motor from overloads. The main cause of relay failure is the loss of the bimetallic plate. As a result, the circuit does not close, the motor does not start, and the freezer does not cool.

Less often the protective mechanism of the relay fails. Because of this, it triggers even at a slight heat. For this reason, the freezer compressor turns on and almost immediately shuts off.

Chambers in the refrigerator are cooled by circulation through the freon circuit. If a micro-hole is formed in the piping, the refrigerant begins to evaporate through it. The freezer freezes poorly at first, and then, when there is no freon left in the system at all, it stops cooling altogether.

The rubber seal around the perimeter of the door is necessary to keep the door tight against the refrigerator’s body. If it is damaged or dried out, the warm air enters the freezer, and the temperature rises in it.

This breakdown is quite rare since the freezer is traditionally opened less frequently than the refrigerator compartment.

If your refrigerator does not freeze – top, bottom, or both chambers at once, do not try to repair it yourself. As you may have understood from our article, a variety of breakdowns can lead to a lack of cooling. Entrust your appliances to professionals: contact the best repair service AT ALL SAN DIEGO. We are open 24/7 a week, on weekends and holidays. Our engineers will come to you 15 minutes after your call in urgent cases. Give us a call, and SAN DIEGO APPLIANCE REPAIR will solve any problem.