Home / Blog / WHY THE DISHWASHER DOESN’T DISSOLVE THE TABLET 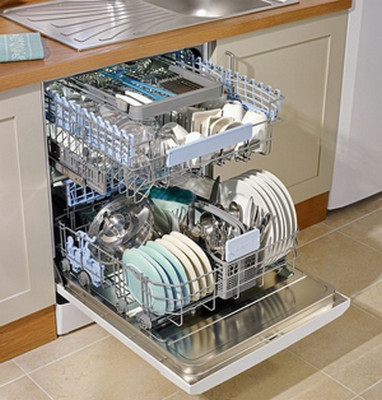 Dishwasher tablets are one of the most convenient versions of detergents. Most of them have a 3-in-1 composition, that is, they contain all the components necessary for quality dishwashing: detergent, water-softening salt, and rinse aid.

Among the disadvantages of tablets are their cost (it is somewhat higher than powders and gels), as well as the fact that tablets more often than other agents, do not dissolve. Why a tablet can remain in the dishwasher untouched or dissolve not completely, read our article.

When you can handle it yourself

Not all cases where the dishwasher does not dissolve the tablet, we are talking about some kind of failure. A number of reasons can lead to this, which can be eliminated by yourself.

Poor-quality tablet. You may have purchased a product of poor quality, the conditions of its storage were violated or the expiration date has expired. Try changing the tablets for your dishwasher to other ones.

Incorrect use of the tablet. Some tablets need to be released from the protective film before use, others have a water-soluble coating. Make sure you use your detergent correctly: the instructions for use should be on the pill box.

Moisture on the tablet. A damp pill compartment or damp hands with which you pick up a pill can cause it to stick to the dispenser and not fall out at the right moment of the cycle. Also, if the tablet gets wet, it will stiffen and therefore not dissolve well.

Incorrect program selection. Modern dishwashers have many different programs, including rinse and short programs with low temperatures. They do not involve the use of detergents.

Filter contamination. During the wash cycle, the dishwasher uses the same water, running it through a system of filters to clean it. As they become clogged with food debris and grease, the water pressure becomes weaker and the tablet does not dissolve partially or completely. The filters need to be cleaned regularly, one to several times a week, depending on how intensively you use the dishwasher and how dirty dishes you load in the dishwasher.

The pill compartment lid is blocked with dishes. Make sure that you have placed the dishes correctly in the dishwasher and that they are not blocking the pill dispenser lid from opening.

The detergent dispenser lid is blocked by the tablet. In most dishwashers, the tablet must be placed horizontally. If placed vertically or on the edge, the tablet may block the dispenser lid, causing it not to open and the wash to go without detergent. Check your dishwasher’s manual for the correct placement of the tablet in your machine.

Faults that need to be repaired

A tablet is a compressed detergent. It needs a good pressure of hot water to dissolve it. If you notice that the dishwasher stops dissolving the tablet or does not dissolve it completely, it is almost always due to insufficient water reaching the tablet or its temperature. The following faults can cause this.

Faulty spray nozzles
There are small holes in the blades – nozzles. Water comes out of them under pressure. Jets of jet propel the atomizer, rotating, it sprays water on the dishes and blurs the tablet. Unfortunately, when using a dishwasher, sprinklers often fail. More often than not, the cause lies in:

Dirty nozzles. The holes are clogged with food residue, grease, and limescale. Water flow weakens or changes direction: the blades rotate slower or do not rotate at all.

Damage to the nozzles due to chemicals. Dishwashing detergents and dishwasher cleaners can corrode the nozzles over time. The nozzles are enlarged and the water pressure is weaker. Beakers rotate badly, washing quality drops, jets do not reach the tablet, and it does not dissolve.

If the gasket is leaking, the water is not getting into the impeller properly and is partially bypassed, flowing down the center of the basket. Sprinkler rotation is weak or nonexistent. Dishes are not sprayed with water as they should be, the jets do not reach the tablet, and it remains unused.

Blockage in the water supply duct
There are channels inside the dishwasher to supply water to the impellers. They may be located on the back of the dishwasher, on the bottom, on the ceiling, or under the middle basket. Due to food particles, lime deposits, and grease getting into the channels, they can become clogged. If the channel is partially clogged, the sprinkler rotates, but slowly. If it is completely clogged, it will not rotate at all. In any case, due to the lack of proper water circulation, the dishes are poorly washed and the tablet does not dissolve

The circulation pump is defective
This node is responsible for the circulation of water during washing. Often it becomes clogged with food residues and grease, and the water circulation is impaired. Also, the impeller blades may break due to clogging. In both cases, the water pressure decreases, the jets poorly irrigate the tank, and the tablet does not dissolve.

Damaged sealing nut of rear water supply channel to sprinkler under the upper basket
There is a gasket nut at the junction of the rear channel and the under basket. When you slide the basket all the way in and close the dishwasher door, the channels fit tightly together and water flows into the middle sprinkler. If the seal is damaged, the water flows down the back of the dishwasher, almost never reaching the under-canal and consequently the impeller. As a result, it does not irrigate the tablet well and it does not dissolve.

The actuator (water flow distributor) is broken.
It switches the flow of water between the sprinklers during the various stages of washing when the dishwasher is in operation. Most often, the actuator looks like an assembly consisting of a motor and two discs. One of the discs is locking: it has holes for the water flows. Depending on the position of this disc, water flows to all or only some of the impellers. Over time, the motor gear and the teeth of the discs wear out, the rotation stops and the mechanism “sticks” in one position. Sometimes the actuator motor burns out due to moisture ingress through a leaking gland.

In dishwasher models equipped with a magnetic valve for adjusting the water flow, the actuator frequently fails due to unstable voltage.

In all cases, the atomizers do not wash the tablet well and it does not dissolve to the end.

Failure of the heating element
Heating elements burn out because of scale formation: either the heating coil burns out or the body burns out. In the first case, the dishwasher usually displays an error. In the second case, water gets on the coil and a short circuit occurs. Older dishwashers, when the coil burns out, go through the whole cycle, but in cold water. Because of this, the quality of washing decreases, and the tablet, designed for exposure to hot water, dissolve badly.

Broken temperature sensor
When the sensor malfunctions or its complete failure, the machine does not turn on the heating element, so the dishwasher either interrupts the cycle, or the washing takes place in cold water. In the second case, due to the lack of the necessary temperature, the dishes are washed badly, and the tablet does not dissolve until the end.

Heater or temperature sensor wiring or contacts faulty
Dishwasher wiring is often frayed due to vibrations during operation. In private homes, rats and mice can damage wires.

Contacts – oxidize or burn out due to moisture.

If the signal on the section from the board to the heater or temperature sensor is broken, the machine does not turn on the water heating, the dishes are washed badly, and the remains of the tablet are visible. Modern models may interrupt the cycle with error.

Wiring or contacts of tablet compartment are damaged
Due to vibrations and frequent opening of the dishwasher door, the wires going to the dispenser drive often come out of their terminals or are frayed. Contacts can burn or oxidize. In any case, there is a signal breakage: the dispenser opening mechanism does not receive a command from the control board, and the tablet remains to lie in its compartment.

If your dishwasher doesn’t dissolve the tablet, and you can’t solve the problem on your own, contact a professional. Call us or book now.

SAN DIEGO APPLIANCE REPAIR has experience in repairing dishwashers. They will help you. All work is done at home. Contact our service: we’ll fix your dishwasher and it will wash perfectly again!